In everything, do to others what you would have them do to you.

Sound familiar? It’s the Golden Rule found in the Gospel of Matthew, and stated in many other religious or philosophical texts outside of The Bible. We’ve all probably heard it at some point in our lives, and just as probably, found it incredibly hard to actually abide by. Yet, Black musician Daryl Davis has used the Golden Rule as his not-so-secret weapon to confront Klu Klux Klan members, face to face, in respectful discourse about racism for the last 35 years.

As a result, over 200 former white supremacists credit Daryl Davis with freeing their hearts and minds from the prison of hate.

His quest and tactics are the subject of the uplifting documentary Accidental Courtesy: Daryl Davis, Race & America, now streaming on Amazon Prime, after a 2016 PBS premiere and a lengthy run on Netflix. With the Black Lives Matter movement expanding around the globe in the wake of George Floyd’s killing by a white police officer, it may be one of the best resources available for those who want to have productive conversations with the racists in their own lives.

Of course, enlightening hearts of darkness is easier said than done.

Davis credits his background as a touring musician, traveling to 49 states and 57 different countries on six continents during his career, for enabling him to interact with people of very different belief systems without losing his cool. “No matter how far I’ve gone and how many people I’ve seen, one thing I’ve learned is this: Everybody wants to be heard, wants to be respected, wants to be loved, and they want the same thing for their families as I want for my family.”

The other key to these conversations, he says, is to “educate yourself as much as you can about your adversaries’ position and what they believe.” 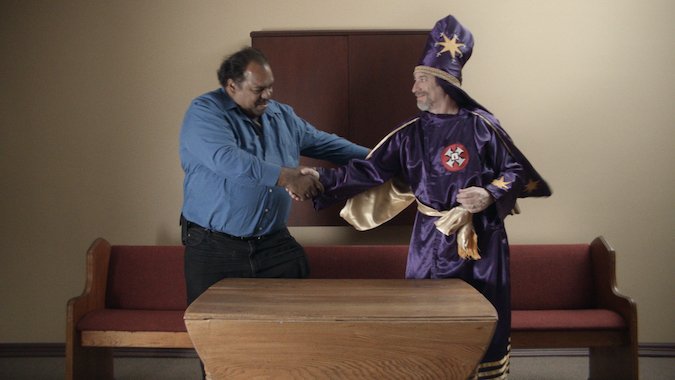 “Because even though they may not like you,” he continues, “when they see that you have done your homework, and you know a lot about what they stand for, they will respect you. And that way you can have a clear-cut conversation, and they are more apt to listen to you and take in what you’re saying.”

During our conversation, Davis cites the Golden Rule as the underlying principle in his  methodical, individualized approach, which began in 1983, when his piano skills impressed a Klansman watching him play with a country band at a Maryland truck stop.

“He said, ‘You know this is the first time I ever heard a Black man play the piano like Jerry Lee Lewis.’ I just said, ‘Where do you think Jerry Lee Lewis learned how to play?’”

At the end of that chance encounter, one of many fascinating and inspiring anecdotes Davis shares in the film, the proud racist handed the Black musician his phone number. He wanted a call anytime the pianist would be playing at the bar again. Davis obliged, and that unlikely courtesy set him on a journey to befriend and educate Klansmen, many of whom have turned over their robes after they quit the terrorist organization.

While filming the documentary, Davis had 26 Klan robes in his possession, and now has “between 54 and 57,” with colorful garments from members ranking as high as Grand Dragons and Imperial Wizards. He tells MovieMaker that he’s going to loan “a good deal” of his collection of white supremacist paraphanalia to the Orlando Florida Holocaust Center, and the exhibit will then tour the United States before returning to him. His goal, though, is to have a museum of his own. 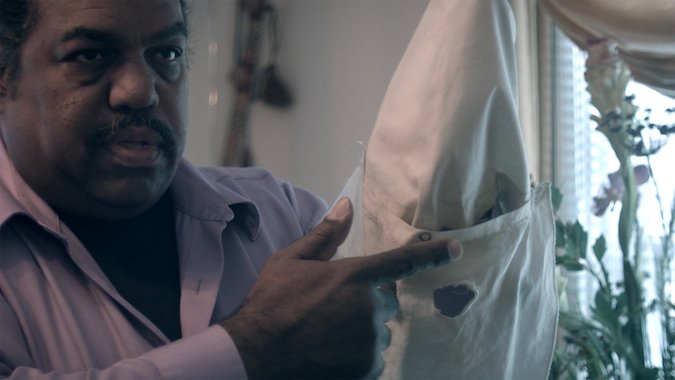 Daryl Davis displays the KKK hood from one of the many robes that have been given to him over the years by former Klansmen who have renounced their membership. Photo by Sam Gezari.

“It will be interactive. Not only can they come and see the history, but they can leave there feeling empowered that they, too, can contribute to taking history in the right direction,” Davis says. “We can’t change what has happened in the past, but we can start from where we are, and help shape our future.”

Davis’ says he directly experienced racism for the first time when he was 10. “I had rocks and stuff thrown at me in Cub Scouts. The question I formed was, ‘How can you hate me when you don’t even know me?’ And that question still plagues me today. But I’ve gotten answers.”