Making The Outside Story Taught Me This: Shooting on Rooftops Is Hard


I thought I was making an easy film. The Outside Story is about fate sending our protagonist (played by Brian Tyree Henry) on a transformational odyssey around his Brooklyn block after he locks himself out of his apartment (in socks). Apartment. Brownstone. Block. It couldn’t be that hard, right?

“Um, hard,” said our assistant director, Laura Klein. The Outside Story is my first feature film and now I understand that feature films that you think are going to be a walk in the park (we literally have a scene that is a walk in the park) still involve masses of people, unpredictable weather, uncontrollable noise and an infinite amount of variables and wildcards. Especially if you are four stories off the ground. Which we were in two key scenes: on a roof and on a fire escape.

Won’t You Take 10 Seconds to Sign Up for Our Newsletter?

“It’s more expensive than you think,” added Julia Thompson, our locations manager, on the subject of securing those locations. Julia outlined for me all the specifics to shooting on a rooftop in New York City — starting with getting the approval of the landlord and ALL the (occasionally mercurial) tenants in the building — which can sometimes require fees for all.

Then you bring in certified inspectors who inspect the roof, check the load-bearing limits and give you the ability to file your permits with the Mayor’s Office of TV and Film (for $500 a pop). Further, Julia points out: you need permission for ANY roof that you’re going to be on at all. So if your actors are on one roof and you want cameras on another, that’s two roofs that Julia and our assistant location manager, Kevin Bay, had to get permission for. They also needed them inspected and permitted.

In The Outside Story, Brian Tyree Henry’s character has to run over a block of brownstone rooftops to escape from a parking cop (played by Sunita Mani). So that meant getting all of the above for five different buildings that he’s only on for seconds of screen time. 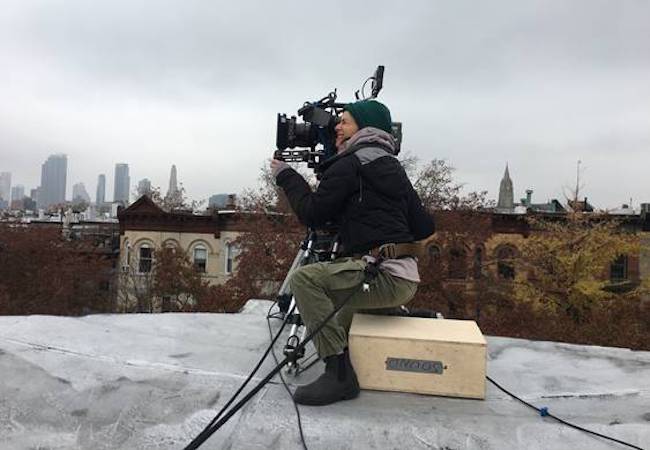 Cinematographer Zelmira Gainza shoots a scene from The Outside Story, harnessed on a rooftop.

On top of that, tenants and landlords have different rules for their rooftops! So during this climactic rooftop run, we had to honor an agreement that one of the roofs could only have talent on it. No equipment and no extraneous people.

I’m not sure we were planning on doing a tracking shot anyway, but that rule made doing a zoom just about the only way to move with our character. Luckily, I love a good zoom!

The next problem is the camera. The camera is heavy. I see now why Steven Soderbergh likes to shoot on an iPhone. Watching our incredible camera team carry, heft and ultimately hoist an Arriflex camera up a rickety ladder and through the jagged and beaten hatch of our hero’s brownstone is just one of a thousand moments that makes you cry tears of gratitude for a great, creative, upbeat crew.

Same goes for our design team, who made trips up and down that same rickety ladder to dress the roof, run power and run water (the stupid screenwriter had written a working hose into the scene!). And then of course, the actors make the same nerve-wracking trip before actually performing, while the storm clouds gather and the wind howls. It’s not easy to tune out the fact you’re 50 feet above a hard-looking sidewalk. Nor should you.

As Zelmira Gainza, our director of photography  noted: “The stunt team was amazing and harnessed me and the camera so we could be right on the edge getting the best angle.”

That’s right. Stunt team. Because yes, what I describe above are real logistic concerns for shooting in these places. Concerns that consistently challenge an indie film budget and timeline. But the real issue, the critical issue, is actually safety. How do you take the masses of people you need to make a feature film and safely squire them onto a rooftop? How do you get them onto a fire escape?A great stunt team is key — and dispels the idea that you need a stunt in the conventional sense to justify a stunt team.

Maybe you knew that already, but some first-time directors who shall not be named thought they needed to have their actors bungee jumping off the fire escape or blowing up the roof to warrant a stunt team. Not true. To really create a safe environment (after we got another set of permissions and permits for the fire escape) we needed a small group of experts like Paul Dreschler-Matell, Anthony Huong, Shawn Doherty and Kaitlin Hiller.

The stunt team scouts the scenes before the actors get there so they can explain how to perform the necessary actions safely, and rigs the harnesses mentioned above (harnesses that then had to be painted out in post by our VFX supervisor, Andrew Lim). On our fire escape, we needed Brian Tyree Henry to climb up and down on the fire escape, interact with people like Olivia Edward inside one of the apartments, and then have a discussion with Sunita on ground level, while climbing back up.

Those narrow metal stairs are no joke and the width on each floor’s platform was not exactly comfortable. So getting our stunt coordinators walk through everything, and show him where to put his feet and hands safely, was invaluable.

So maybe it wasn’t an easy film to make after all. A vortex of permits and inspectors certainly sapped some of the DIY spontaneity I’d deployed in previous short films on rooftops. But doing it right, doing it collaboratively and seeing all the parts moving in sync to tame that vortex — it’s so worth it. Shooting with the New York City skyline in the background, way up above the tree-lined streets of Brooklyn, you capture a sort of hidden space that is both stark and rich in character at once. I loved seeing Brian and Olivia against the clouds, on the edge of a roof, finding peace as they contemplated the city laid out before them — their legs harnessed to a steam-pipe.

The Outside Story is now available on digital and VOD.