Miranda July alternates between making movies, performance art, writing books like 2015’s The First Bad Man, and acting in projects like Josephine Decker’s Madeline’s Madeline. Her third feature as a writer-director, Kajillionaire, follows a family of petty criminals (played by Richard Jenkins, Debra Winger and Evan Rachel Wood) whose dynamic is disrupted by the addition of a newcomer, Melanie (Gina Rodriguez). In this conversation with her friend, Emma director Autumn de Wilde, July discusses her approach to taking notes, how the family is like a cult, and Wood’s connection between Edward Scissorhands and her character, Old Dolio. —MM

Autumn de Wilde: I was lucky enough to see your first movie Me and You and Everyone We Know, before a lot of people, because of a cover shoot in 2005. I remember this lightning-bolt connection happening, watching that film, and then even more so, once I met you. You’re someone who interrogates awkwardness and the power of connection, and you put so much volume on the tiniest moment. That’s a superpower you have, and I was thinking about it again while watching Kajillionaire.

I’m not a writer, so I want to ask, where does this start? Does it start with an idea or a character, or is it developed from a feeling?

Miranda July: I’ve become a believer that ideas just come, as annoying as that sounds, but that you can have a lot of work preparing for it, essentially.

Because I alternate between movies and books, I knew I needed an idea for a movie. But to me that’s a deep thing — that’s like needing to find a mate or a religion or something. How do you set out to do that? I wrote two scripts that had what I call a “fatal flaw,” which means that if you notice early on that an idea has a flaw, then try as you might, you’re never going to overcome that. You best drop it, and then once you do, you feel released because you’re not saddled with something with a “fatal flaw.”

With my last novel I had written something else before the idea that came. At this point I understand this not so much as a mistake, because in a way you’re preparing the ground. When I think to the beginning of Kajillionaire, I think back to those two ideas which have tendrils in this current film, in that they both had to do with parenting. One of them was a “fatal flaw” because it really was not my story to tell. I felt politically it just wasn’t going to fly. And the second one was a “fatal flaw,” because it was too sad. I realized that I wasn’t ready to work on something that touched at the heart of one of my wounds.

Because I work on multiple projects at a time, what I do is write down every single feeling or idea or thing or conversation — anything that’s interesting to me — sometimes for years. I’ve been doing that process for the book that I’m writing now, since before I started making Kajillionaire. I have years of this note taking that’s very low pressure, since it isn’t the primary project now. Just throw another note in Evernote or a notebook.

I say all that in part so that it will sound less annoying when I say, “and then it kind of just comes.” And that happens really in a moment, on a long night, or sometimes a long drive. It’s some situation where I’m relaxed physically. You can’t be tense all the time if you’re trying to court an idea.

For Kajillionaire, I was in bed. I was staying at a friend’s house in Portland. I was sharing a bed with [my son] Hopper and Mike [Mills, her director husband]. I felt kind of trapped, which may have triggered some young feelings of being trapped in a family. I just saw these characters, with the long hair just sort of walking toward me, and I reached across Mike and Hopper’s sleeping bodies to my phone and started very quietly dictating the story. Then it was like a year and a half of writing. For me that’s not that long. I felt like the years spent before, during the wrong ideas, already had me in my script-writing mode.

De Wilde: You have an amazing talent for investigating people’s flaws. I feel like Kajillionaire is a study of how a cult could happen. And I was thinking about the family as a cult, and how a lot of people, once they reach the age that Old Dolio is, they have to shed the cult of what their family convinced them is true. Or they have to run away from it and come back and realize what is right about the truth in that family. It’s not a simple good-and-evil kind of thing.

July: That was sort of a basic premise, which is that every family is a cult, because you can’t be outside of it for quite a long time. It’s all you know, and it is filled with these values and very particular ways of doing things. And it’s weird because having grown up in it, the child is the best member of the cult. And it is the child’s job to leave. You can’t really stop that. And that inherent betrayal is built into the child-parent relationship. On the parents’ side, you will be wrong. It’s just the nature of generations and time passing. What you’re saying and teaching to some degree will not be true for them — that’s sort of unavoidable.

Obviously, the parents don’t fare that well in this film. Sometimes I’m like, “Oh my God, Mike made these two movies [Beginners and 20th Century Women] that are odes to his parents. And I have this movie where the parents—who are not my parents, but nonetheless… 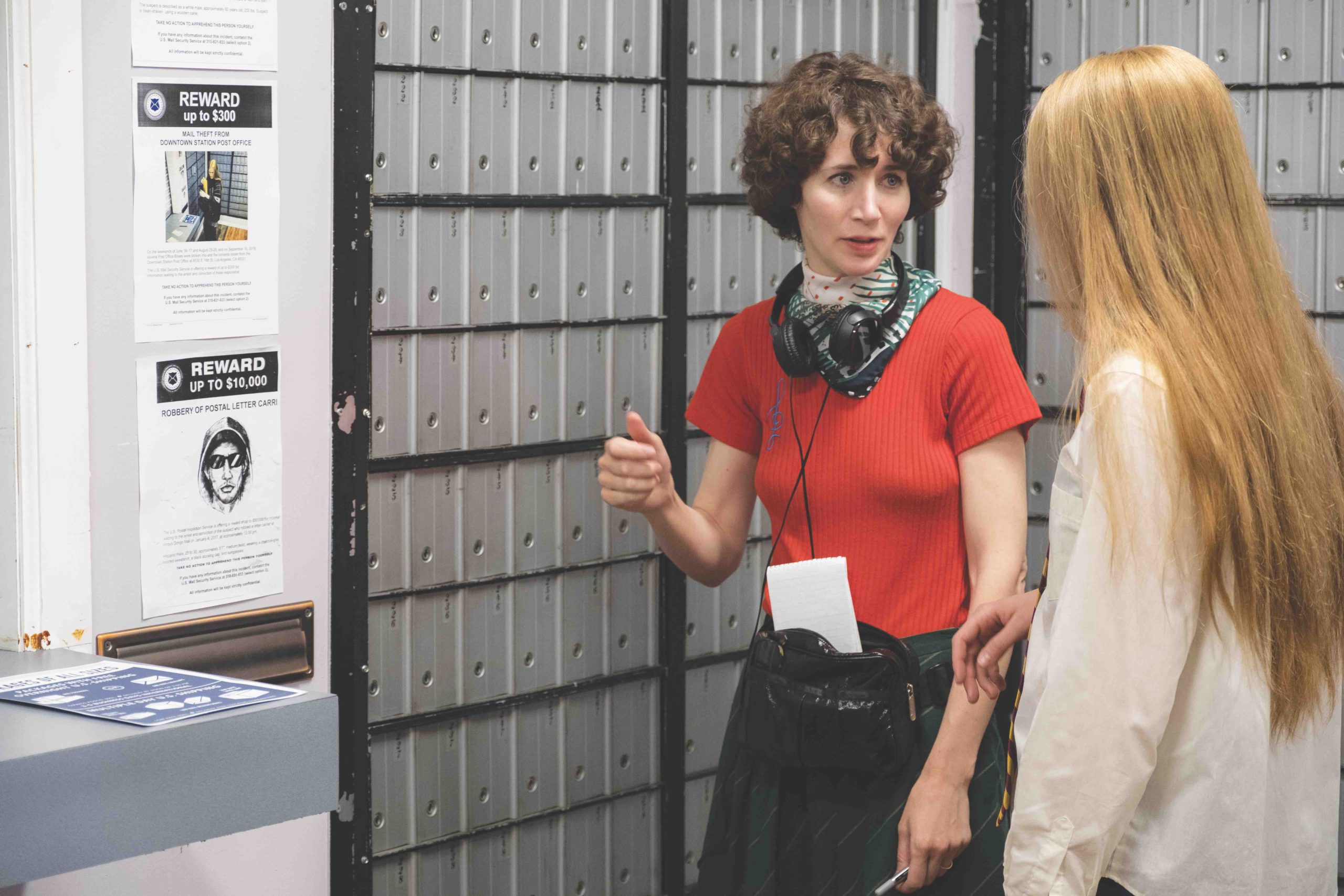 Miranda July (L) and Evan Rachel Wood on the set of Kajillionaire. Photo by Matt Kennedy

De Wilde: In Kajillionaire, because Old Dolio was about to hit an age where she couldn’t play the innocent child in the family’s con, she became an annoyance — she wasn’t a perfect partner anymore. I love their choreography and how when the con is going well, they’re perfectly in sync. They are almost like a family you want to be a part of. And then as soon as the job is over, she becomes an annoyance to the parents. Is it possible that the annoyance with Old Dolio is that she’s not invisible enough?

July: That’s interesting. You imagine that her believing in this whole world has been important to making it real. She is very much on the edge of not being believable in that school girl costume.

De Wilde: There’s so many layers of conning going on. There’s conning within the family; there’s cons to skim off the top and make a few bucks. And then there is the big-picture con about how they see the world.

As an audience you could fall into the trap of, “Who would ever believe that?” and then you actually do manage to trick the audience. When you were working with Evan Rachel Wood, Richard Jenkins, and Debra Winger, were you guys talking about, “Okay, give it away here. Hide it there”? It’s so clever in the way that some things feel like only an idiot would believe, and other things as a viewer you’re like, “I just got totally bamboozled by them.” How did you navigate that as the director, in how much to give away to the audience about what was going on?

July: To some degree that was built into the script. I remember Richard would ask a lot, “Do I actually believe what I’m saying here?” We were in the relatively early days of Trump, and he would sometimes say, “Or am I like Mr. Trump? Like it sort of doesn’t matter. What matters is that I’m saying it, and I’m in control.” The truth was almost irrelevant. What mattered more was control, pattern, power, and the performance of the truth.

With Evan, we worked hard before we started shooting to set up her bandwidth. There’s no character in this film that’s not a fully formed soul. But someone like Old Dolio could have very few ways to communicate, or to even conceive of her soul and how to articulate it. So we worked to kind of shut her down. When she was Old Dolio, Evan only allowed herself a fraction of the mental space that she has as a person, and that became second nature. It was a delight to watch.