Daddy Issues Issues: What We Learned From Producing Our Narrative Feature Debut


Our new film Daddy Issues is a female-driven ﬁlm about rediscovering yourself in the wake of a loss. The film follows Henrietta’s emotional journey as she works to come to terms with her identity after her father’s death.

The inspiration to make this film came after the sudden death of our distant, but loving father. We were living on other sides of the world when it happened; Kimberley was working as an actress in Los Angeles, and Amy was living in Israel, where she was writing for the Jerusalem Post. We would call each other and laugh at our modern dating mishaps, our dysfunctional families and our failure to come of age and navigate the competing demands of our twenties.

There were certainly many lessons to learn when making our debut narrative feature. Neither of us realized how long one needs in pre-production, and we really wanted to keep costs down, so after a manic two weeks of casting and location hunting, we had to start filming with a script that wasn’t completely locked.

This reminded us of a press event we attended in Cannes where Woody Allen said he would often rewrite pages of his script on the day of shooting. We liked to take a similarly loose approach… let the film take its own journey, and try not to be too precious about things. Sometimes a location or actor bought something different, and we took these twists as an unexpected delight. We learned that a film does not often come out exactly as you think it will, but this is also where the magic happens. You need to trust yourself in real time, trust the team around you and the process.

There were many moments of joy while making this film. For one, we decided on a stylistic choice of static shots only, which we loved from many indie films we admired, such as Ida.  The static nature of the filming had an added benefit of keeping the budget down: We did not have to use dollies, so set-ups were much quicker.

One problem we encountered with a static approach, though, was that actors had to walk into a mark, which felt a bit unnatural on-screen. Our director, Laura Holliday, managed to lean into it, and it became a comedic choice that we’ve been complimented on. 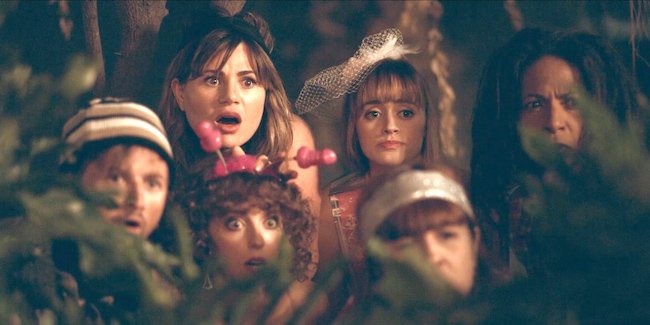 This shows that low budgets can often push you into having to cut back on certain things, but thinking creatively will give you something interesting. Never be afraid of this.

Filming Where Permits Are Not Needed

To try to save money, we found an empty lot where we could film in Los Angeles. This was one location that did not require a permit to film, so we decided to film there as much as we could. We were not the only people to learn of this site, as other filmmakers were filming concurrently. What could have been quite frustrating ended up being a mutually beneficial experience as we ended up making friends with the other crews and shared crafty, gear and tips.

Some scenes were more complicated to pull off for such a small production, including the bachelorette party scene, where we had to fit five actors inside a moving car in one shot. Such a scene creates issues with stabilization of camera, and how the director was going to actually direct the scene.

We had an amazing DP, Dylan Dugas, who made his own homemade camera rig, which we attached to the inside of the car. The director followed behind in a different car, watching on a screen and directing everyone through an earpiece. We had numerous problems with people talking over each other, and the scene had many props, like bridal sashes near the mics and balloons filling the car. That meant  a lot of rustling that had to be cut around and fixed in post.

People love to say “we will fix it in post,” but when it comes to low- budget filmmaking, it is always better to tackle these issues on set rather than in post, wherever possible. The post-production process can be an overlooked place where a large portion of the budget needs to be set aside.

Still: We had so much fun making Daddy Issues, and dealing with all the challenges that come with a smaller budget. We are excited to share the final product with the world and hope it can inspire other filmmakers to not be afraid of challenges — lean in!

Daddy Issues is available on-demand June 23 and you can pre-order on iTunes here. You can follow Daddy Issues on Instagram here.