Can Fulldome Be the Next IMAX? We Go Inside the Large-Scale Format


Many of us are a long way from feeling comfortable in a movie theater. But when we do go back, after months of watching screens at home, we may seek out the biggest, most immersive experience possible.

Fulldome is a large-format form of entertainment typically found at planetariums founded just over 20 years ago. Remember when IMAX was mostly for kids on field trips? That’s how it is with fulldome now. But that may change as moviemakers seek new mediums and challenges — ones with the immersiveness of VR, but the collective experience of watching with an audience.

MovieMaker spoke with Michael Daut, a seasoned media specialist who began working with the format when it was brand-new.

Michael Daut: In 1998, I moved to Utah to work in the marketing department at Evans & Sutherland, who essentially invented computer graphics back in the late ’60s. In 1999 the annual SIGGRAPH conference was held in Los Angeles. It was an opportunity for the company to show off this fulldome technology that they had been inventing. Essentially we wanted to use this immersive technology to create a marketing piece around one of our computer graphics cards that we were rolling out. And nobody put their hand up to produce this show, because nothing had been produced in this format before. So, I put my hand up: “I’ll do it.”

The tools at that time were extremely primitive, but it ended up coming together really well. Because of my work on that show, the digital theater division at Evans & Sutherland brought me over and then I became the director of show production and helped shepherd about 20 fulldome films in various roles: writer, producer, director. Not always all three but almost always as a producer. I wore many hats in that department and was even involved in bringing IMAX films over to the fulldome so that people wouldn’t have to have two different systems in their theaters.

MovieMaker: In your opinion, what’s the next big step for fulldome? Is it just having more audiences become aware of it, or for the films to move into more narrative-driven realms?

Daut: By and large, domes where these films can play exist in planetariums or science centers. Imagine if television was something that you could only find in hospitals — what would the programming look like? So that’s kind of what has happened in the fulldome world where most of the programming is astronomical or science based — which is great, but also somewhat limited.

There’s so much more that can be done, because really, if you think about it, the dome is a space where people can be transported into different environments, much like the Holodeck in Star Trek. And so the capability for storytelling is really unlimited. But it requires a different sensibility. The next big leap is to leverage that community aspect of being transported. It’s almost like group VR. VR is a compelling medium, but it’s not something you easily share with friends. VR is analogous to saying, “Hey, let’s all go out together and each read a book. VR is much more of an individualized experience.”

But with the dome, you’re having that shared experience with an audience together; yet you’re still having that level of immersion that you would have in a headset. It’s next-level. A big next step is to figure out how to leverage those storytelling experiences, to activate an audience in a way that it drives them from their homes, to experience something that’s more transformative than just seeing a movie. 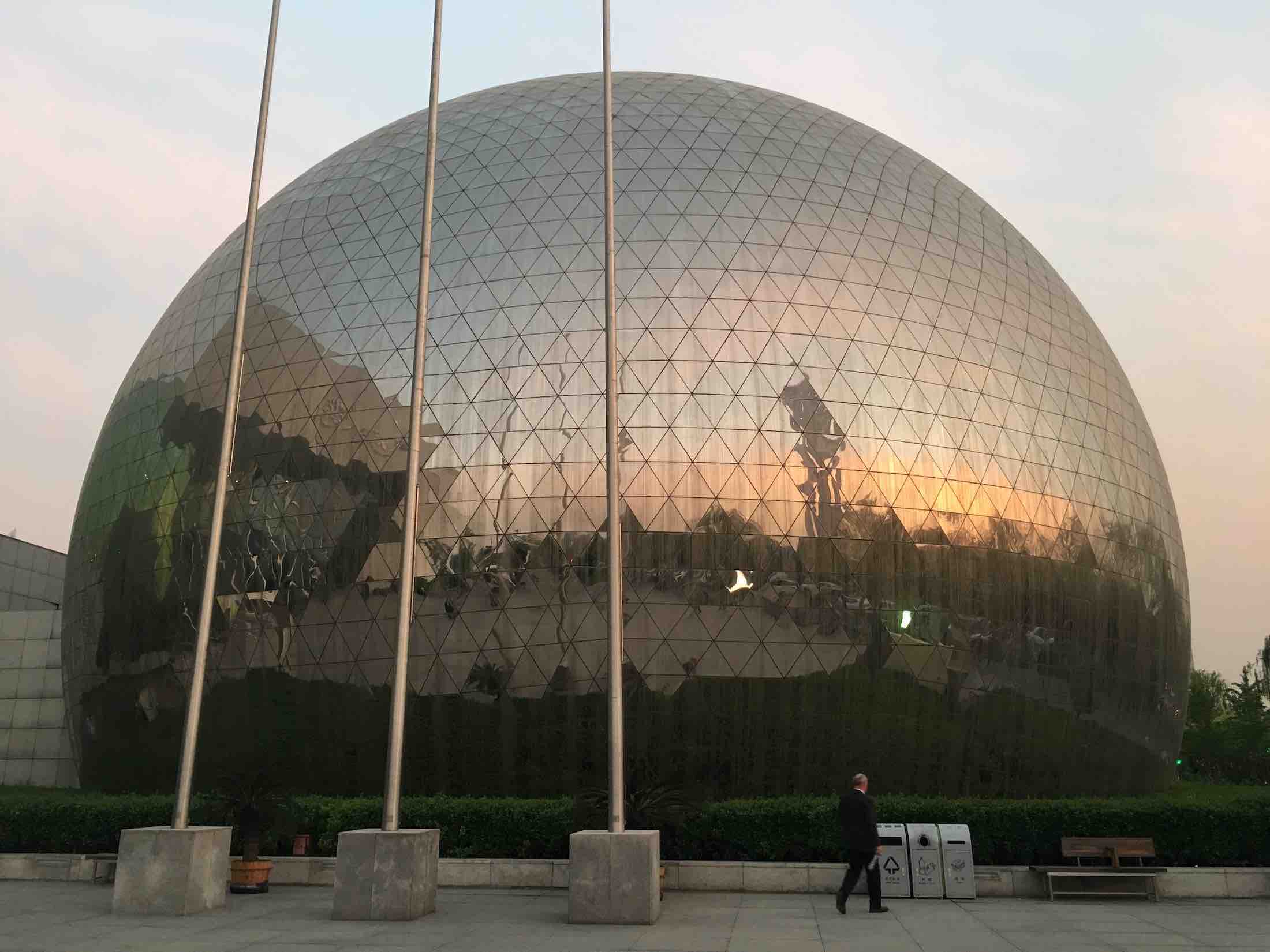 Exterior of the 8K digital dome theater at the China Science and Technology Museum, Bejing, China

Before this pandemic lockdown happened, the movie industry was having issues getting audiences to fill theaters, partially because there has never before been a time in our history where the potential technology at home exceeds what you’re going to have in a movie theater experience. Most movie theaters do not project in 4K, but now you can buy a 4K TV almost more affordably than a 1080p TV. There are even 8K televisions on the market, and it’s all kind of backwards — the home viewing experience is not as substandard anymore as it used to be. We need something else to drive an audience. And I think this immersive space is something that has that level of uniqueness and has the capability to deliver an experience to an audience that is unlike anything that cinema can offer. It’s just a matter of the producer stepping up and saying, “I want to do this,” and then defining how that business model looks, and where these experiences can play, because you also have the barrier of these institutions that are used to running scientific content hesitating to diverge into something that’s not 100 percent on mission.

MovieMaker: If one of our readers thinks, “I have a lot of ideas that could potentially work in this medium,” what should they do?

Daut: I think step one would be to get with someone who has produced for the medium before: someone who is conversant with the grammar of the cinematic language and how it transforms to work in that immersive space. First see if the idea is right for an immersive dome experience. I would next recommend that they talk with other producers who have invested in these types of experiences, to learn what the return has been. Learn what has and hasn’t worked to get that sense of where the market potential is, and what the distribution model would be. There are different ways to approach it. The traditional model is tough, where you’re trying to convince a theater to license your film for a period of time for a certain amount. Should the deal be a revenue share or a fixed license fee? When do you need to be able to recover your investment and what should your investment be? Lots of difficult and practical questions right out of the gate.

MovieMaker: I remember an elementary school trip to a science center in Pittsburgh to see a Lewis and Clark film on IMAX. Then someone like Christopher Nolan decides to shoot and exhibit his blockbusters in IMAX. These bigger names helped shepherd that experience into a larger public consciousness. Do you see a similar path for a fulldome?

Daut: I do. I think the challenge there is really the distribution issue in terms of what the theaters will book. IMAX has been successful in convincing many museum venues to also show these Hollywood films. In the fulldome world, that doesn’t really exist… yet. There would be that extra barrier of figuring out how to convince the museums and planetariums at large who have these fulldome theaters to run “Hollywood” content. 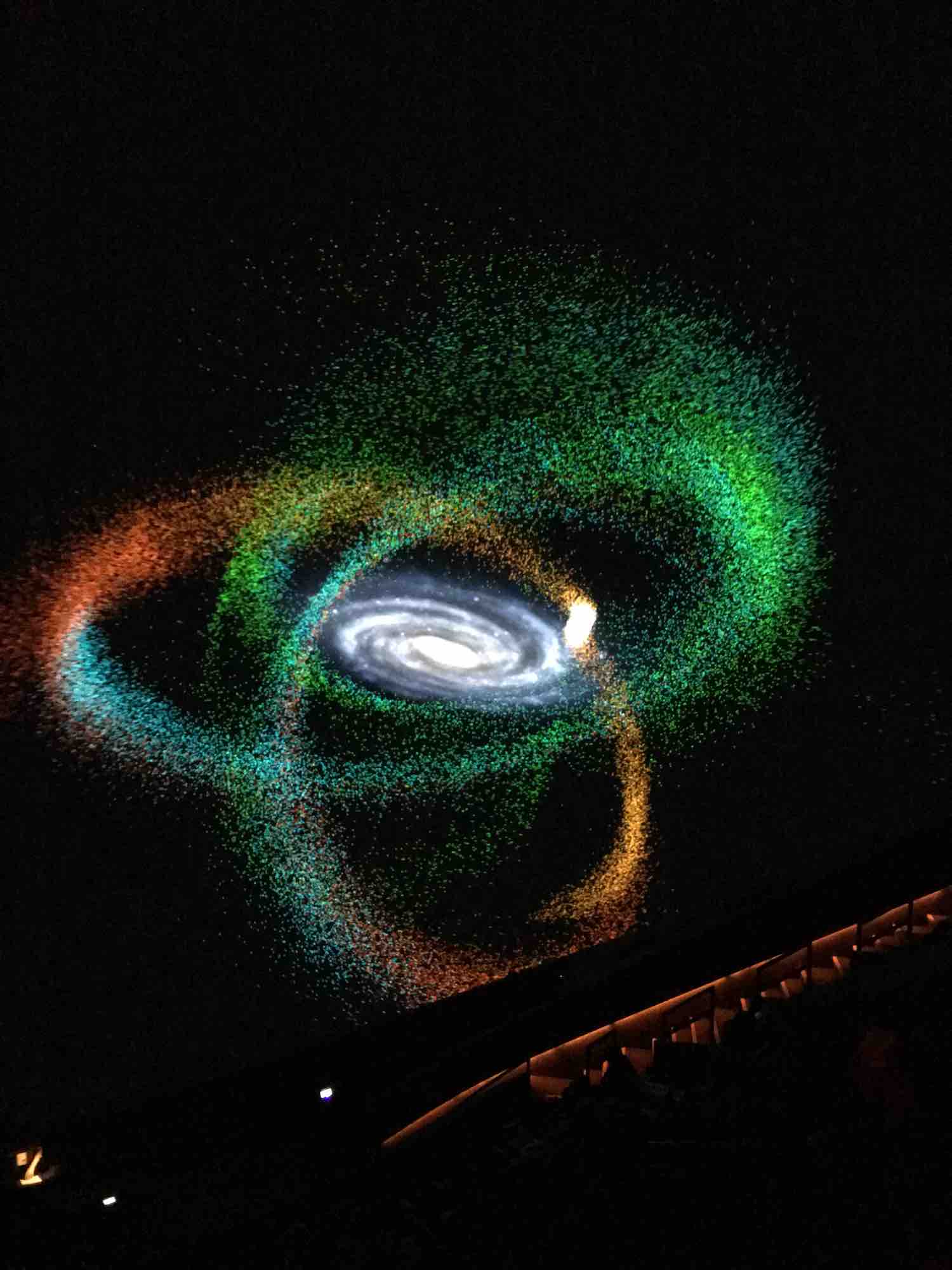 I think we’ve been underwhelming the audience to some degree. Part of that is that there’s a glut of content in the market and most of the content is evergreen. New films don’t necessarily have the impact they have in just about any other space: cinema, television, streaming, etc. Existing fulldome films are still licensed for many many years, purely because of the film’s topic, and the fact that they are designed to last. For example, there’s a 15-year-old film about black holes, but venues are still licensing it, because it’s a topic that is still fascinating to people. And that older film may trump a new film that comes out that has a topic that may not be as strong or may not be as tied into the curriculum that a particular planetarium wants to promote or that a school group is going to want to come to learn about. There’s a lot of interesting barriers that have to be dealt with. But I think a marquee title — one that captures the audience’s attention and generates a solid buzz — could make a huge difference. And that could open the door to other similar experiences that people would want to consume and that theaters would be happy to have audiences come in to experience.

MovieMaker: Can VR content be ported over to fulldome?

Daut: Absolutely. In VR, you’re building a sphere. In the dome, you’re building a hemisphere, half of that content, so you have all the raw material there. You have the ability to choose where your horizon line sits in the dome, and the only concern would be the pacing and the way the experience would need to be adapted to multiple people experiencing it at once, as opposed to an individual.

My advice would be to envision the dome setting for the film in advance. If there are alternate takes you need to create or shots you need to produce, you can do this during the production to ensure that the show is an optimized dome experience… know that ahead of time.

But because you’re shooting spherical as opposed to hemispherical, VR content adapts beautifully — you’re definitely pulling from the same type of source material and the same format so to speak.

Continue for more of our conversation with Michael Daut on fulldome