Bloody Nose, Empty Pockets, the latest film from moviemaker siblings Bill and Turner Ross, has a simple premise: Some barflies come together to mark the closing of The Roaring Twenties, a dive bar on the outskirts of Vegas. The movie premiered in the documentary category at Sundance, but there was more than meets the eye — the film is a work of docufiction that rewards repeat viewing. It opens with a quote from the Declaration of Independence: — “We hold these truths to be self-evident”—which also serves as an advisory to viewers.

MovieMaker enlisted Jonas Carpignano, an award-winning moviemaker and close friend to the brothers, to dissect the Bloody Nose, Empty Pockets with them. He has a special vantage point after seeing many versions of the project, from its initial four-hour cut (which Bill maintains is the superior version) to the eventual 98-minute version that never leaves The Roaring Twenties. —MM

Jonas Carpignano: You guys are not strictly nonfiction filmmakers. Obviously the documentary community has embraced you guys very much over the past few years. And that’s a wonderful thing, but it would be misleading to put you squarely in that box. And that opening Declaration of Independence line is the perfect quote to speak to that, because even though there are some more fictional tactics at play here, the ultimate goal is to get at a certain truth.

Where in the process of making this do the documentary tactics begin and the fiction tactics end, and vice versa?

Bill Ross IV: We approached it like a fiction film. Basically, we built ourselves a playground in which we could just be documentary shooters. So we constructed a scenario from fictional approaches. But then once you flip the switch inside the bar and things started moving, we were just shooters for the most part.

Turner Ross: We didn’t prepare for it differently than we have in the past, although it’s always an evolution and certainly this is the most recent evolution of that idea. Who are the archetypes that fill this space? What does that space want to look like? Where do we hope this story will go? And then we were able to construct that environment, fill it with these archetypes, and hope for some semblance of an alchemy. Because really — if we’re doing what we say we’re doing — what we’re after is some some sort of inherent greater truth, where these people aren’t reading lines off the page, or woodenly espousing our ideas, but are instead inhabiting the spaces that we create so that they can fill it with their own unique humanity.

Jonas: You feel that in the film. You guys know some of these people very well — you didn’t just meet Pam at the bar, and you didn’t just meet Lowell at the bar. So to me, there is an element of not necessarily writing, but crafting what the experience is going to be like by these specific individuals that you choose. So that alchemy you describe comes through casting a very deliberate selection of people. This isn’t The Real World. You guys aren’t looking for drama. You’re not looking to get people together and have them get into a fistfight. You’re looking for a certain group of people that are going to create — like you said — this alchemy and energy. The people you picked: Why?

Turner: Certainly, we wanted to bring in people from our experience that we knew could inhabit these spaces well. But you’re right, Jonas, we spent a lot of time deliberately curating the people that would go through here, so that we had a cross section of voices, faces, and experiences. We’ve spent a lot of time in barrooms. We have done an adequate amount of research to understand what makes a room like that work to a certain extent and part of that was going out into the world and really looking for it. For the Michael [Martin] character, we had in mind Michael Jeter from Grand Hotel in the ’90s— this down and out character pining for a lost age. And so we had to go find that person. But then there are other people, like you were saying, Lowell and Pam — those people are fixtures and they know very well why they inhabit a space like that. And so once we had some of those linchpins, we could say, “Alright, who do we need to be around these people to fill out this space? Who’s the person that arrives at 10 a.m.? Who’s the person that arrives at 7 p.m.? What experience are they speaking from?” It was a very deliberate quest. 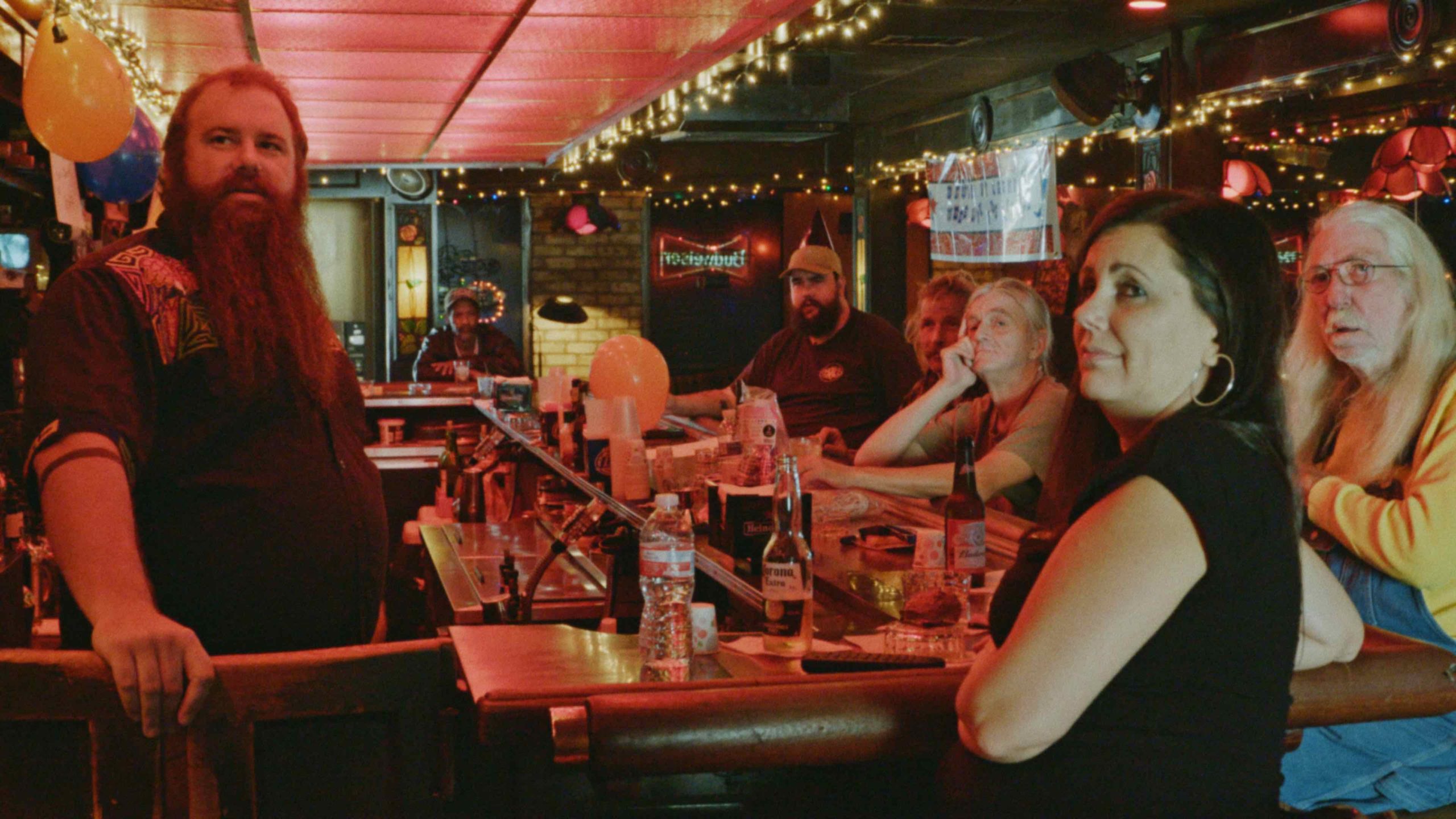 Jonas: This film is a testament to one of the greatest things about you guys as people and as filmmakers, which is that anytime people are with you, they feel comfortable, and that is key. If you had just gone into a random bar in Las Vegas, you might not have gotten those reactions. Instead you were able to create this container, this petri dish, where everyone was being observed, but they didn’t feel like they’re being observed. That’s an underrated thing in filmmaking. It’s not just technically what we do or where we place the mics, but it’s also that sense of togetherness — that common bond that people have when they’re working on something — that you guys are really good at creating.

Bill: We want to create environments that you want to be in, on the front end and the back end. We don’t create a space that people are willing to be in with us. We spend a lot of time thinking about that.

Turner: You can’t build a firecracker with flour. What we wanted to challenge ourselves with this film, was: Could we create a conducive temporary environment that would feel lived in? Could we create a sense of community with a group of people who hadn’t necessarily had that prior to it? We always try to set up a challenge, so that there’s an element of fear — it keeps us on our toes. And then, the experience of doing it is an act of discovery rather than of execution.

Jonas: You guys have described this film as one 18-hour long improv. How did those 18 hours unfold? Did you go in and light, plant some mics?

Turner: Well, it happened slowly over the course of a week. On the first week, we had the bar for a day, and we did set decoration, planting things, and made sure that we had practical lighting with some camera tests. And while we did this, we brought in each individual cast member and had them sit and find their comfortable space at the bar. And we sat down with them and we did the thing that we never do on screen in the film, which is ask questions and basically interview them about the scenario of the film and what was going on in their life. That gave us some insight into what to look for and what might come up in conversation. This allowed the characters to become comfortable with us in the space. 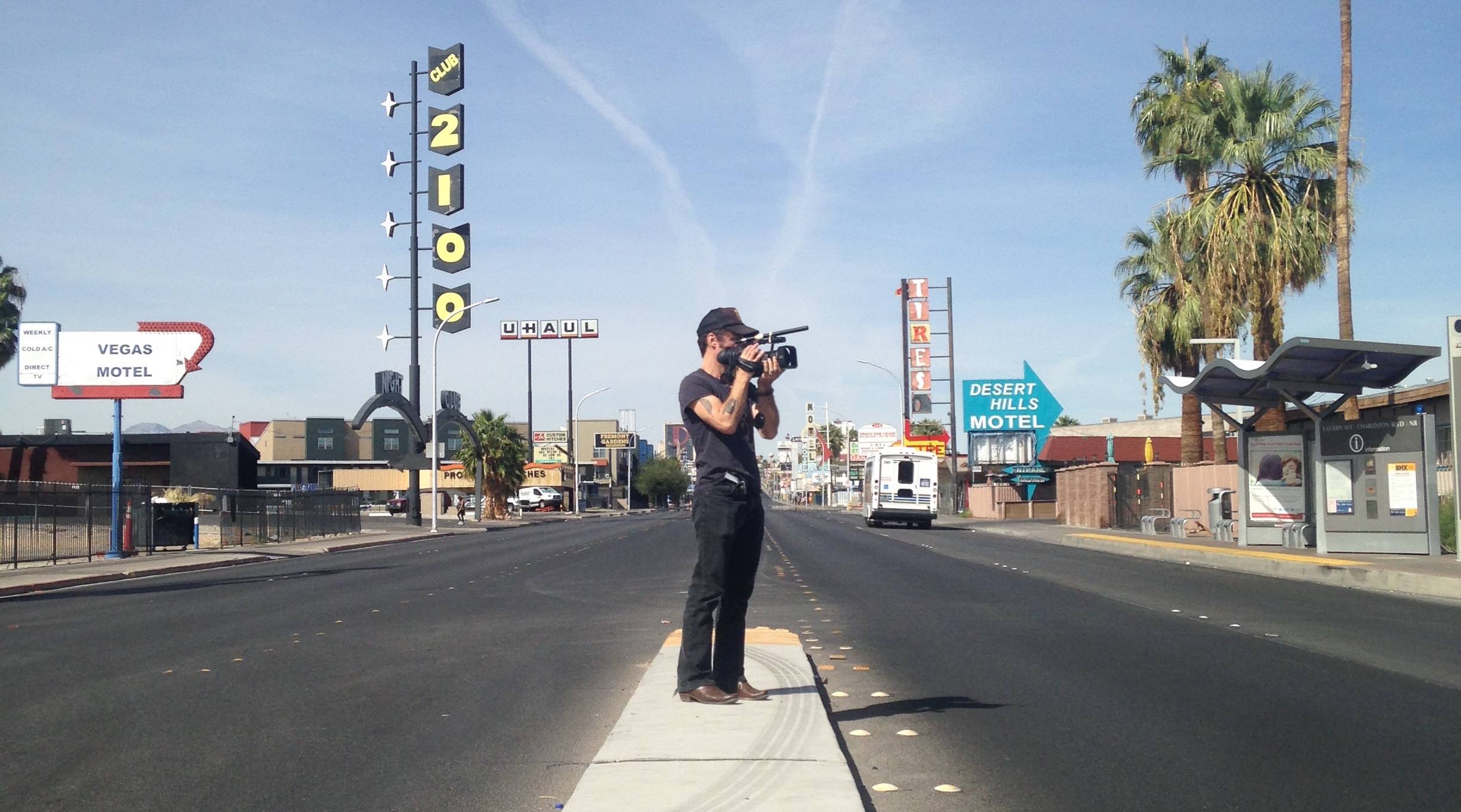 Bill: We prepped the bar. We did minimal lighting. It’s a pretty dark bar. We had 14 mics around the bar.

Bill: So that was a major challenge in post. We had a sound mixer in the beer closet, and his job was a nightmare.

Bill: Oh yeah, so it was a total disaster for him and for us in post. When I was cutting it, I listened to all 18 hours of each of the 14 tracks, just to try to understand what happened. There was a lot of stuff that we didn’t even realize went on while we were in there.

Turner: So we set up the space and we built towards that 18-hour moment because we knew when we started it, we didn’t want to stop it. We wanted to create a closed set in which everybody was comfortable and knew that the spell wasn’t going to be broken. … Bill and I could just continue to shoot what was happening based on the stimuli that the people were receiving: the entrances and exits, the music, the TV. It was a two-camera setup in which the whole stage was live, so you could go any place in that space. I had a shot list: an idea of what needed to be captured in each moment of the day, each season of the day, from the morning drinkers through into afternoon and the evening. Bill’s camera was the color camera. So he was there to find whatever actually happens. Often there was a confluence between those two cameras.